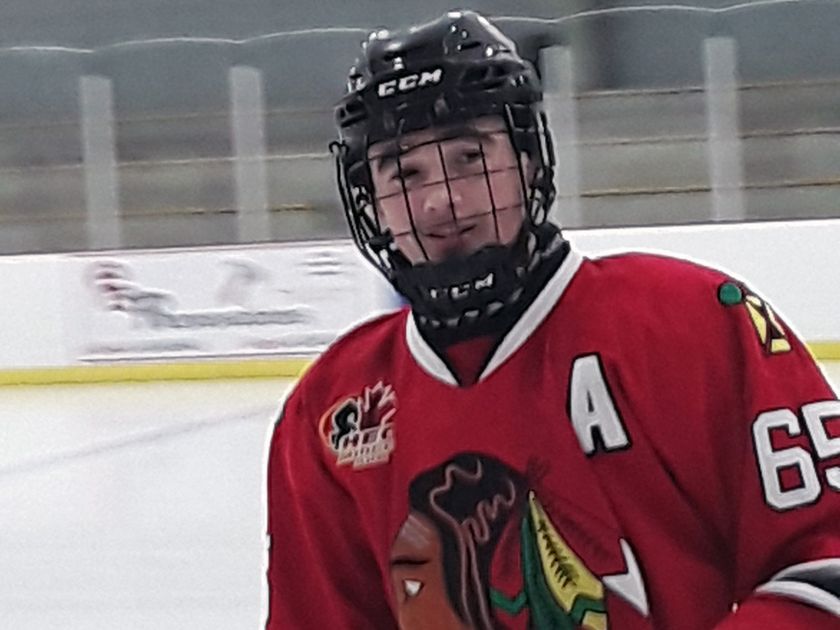 The St. Lawrence College Saints were the first school to offer Gavin White a full scholarship. The Jr. Braves defenceman didn’t need to hear from anyone else, though.

White had been talking with Saints staff for about a month-and-a-half, but he wasn’t expecting to commit last week when St. Lawrence invited him to come down to watch a game. White and his father Steve talked to an assistant coach before the game and he invited them to come to the dressing room after to speak with head coach Mark Morris.

White, along with his dad, went down to the dressing room after a 6-5 loss for the Saints and spoke with assistant coach Mike Hurlbut for about 10 minutes before Morris came into the room. Morris reiterated the things Hurlbut was telling White about his game, said Steve, and eventually said, “We’re ready to make a commitment to you when you’re ready to make a commitment to us.” The 16-year-old said he thought the bench boss was reaching out to him to become a future Saint, but it was so unexpected he wasn’t quite sure if understood what the coach was saying. Hurlbut walked White down the hall and filled in the blanks for him, adding, “Do you know what just happened?”

“It was quite a shock,” said White.

The St. Mary student-athlete could have taken some time to think about the offer, but he didn’t need to. He agreed right there on the spot to become a Saint starting the 2022-23 season.

White’s uncle, Rob White, went to St. Lawrence for four years starting in the late ‘80s. His team went all the way to the national championship in 1988 and that squad is considered the best Saints roster after compiled.

Steve listed off Brockville-born blue-liners that have gone to the school in recent memory – Randy Sexton, Hank Lammens, his brother Rob White, Mike McCourt, and now his son. That’s not to mention all the Brockville Braves defencemen that have gone through the Canton, N.Y. school as well.

White will have a slew of friends at the school by the time he gets there with local forward Cody Monds, who is currently playing at Northwood School in New York; Jared Lambright, another Northwood School player; and current Braves defenceman Tyler McBay all attending the school within the next couple of years.

After White committed to St. Lawrence, he sent a message over social media to Jake Lammens – Hank Lammens’ son who is also a defenceman and committed to the Saints a few months ago for the 2021-22 season – telling him about the news and that they, “Had to get out for a round of golf this summer.”

That’s a nice connection, added Steve. Rob White and Hank Lammens played two seasons together on the Saints and were defensive partners for a year. More than 30 years later and a new generation of Whites and Lammens are uniting under the same school banner.

“You don’t really think it’s going to become a reality when he’s 10, 11, 12 or 13. This year his game has really taken off,” said Steve. “Having him go to a school that close and be able to get an education out of it, it’s been our dream for years. We’re still in a little bit of shock. It’s hard to wrap your head around.”

The scouting report on White is he’s an offensive-minded defenceman. He moves like a forward in a lot of ways with how he skates and he’s quick to jump into the play. You would think he’s played forward for the bulk of his career before making a switch to defence in recent seasons – like Prescott’s Ben Hutton did – but White has almost always been on the blue-line.

He grew up on a healthy dose of watching Erik Karlsson’s style of play, said White. Mix that with his father telling him, “The best defence is offence,” and you get a teen with 20 assists this year, which ranks him fifth in the HEO Midget AAA Hockey for helpers.

“There’s not a whole lot of room anymore for slow, big defencemen. You want puck moving, fast skating, solid defencemen that can help out offensively and defensively,” said White.

That’s an easy concept to understand. Easier than having to react to a surprise scholarship getting offered to you.